National Association for the Blind - Karnataka

Engaging in social responsibility and community development is increasingly becoming more relevant and significant for any organizational entity today. So whether you want to contribute to a cause or motivate your employees towards social engagement and empathy, there are many options at NAB that you can be part of. In the process you will also be helping us do more for the visually challenged.

Meanwhile, here are some options by which you can make a difference at NAB.

Click here to Sponsor and help us do more


Click here to become a Life Member of NAB

Our donors have enabled us to reach out to the visually challenged because they believe in our vision and help us realize it. As an organization you could help us do more by supporting us in our cause through donations or engaging in sponsorships. These could go towards our various training/rehabilitation programmes, our rural community development initiatives or the other new projects and activities that we plan for the benefit of the visually challenged.

Volunteering at NAB can be a fulfilling experience, as many of our volunteers have shared in their testimonials. NAB regularly welcomes volunteers from corporates who get involved in our various training programmes and other activities for the visually impaired. As a corporate you could encourage your staff members to be part of the NAB volunteering activities, which may also be in line with your CSR vision and objectives.

Our programmes for the visually challenged and their families include a variety of skills sets, all aimed at making the blind self-reliant, confident and employable. They range from basic rehabilitation, daily living skills and mobility, to advanced computer skills, communication and industrial training. Your support will help us expand the bandwidth of our training programmes.

Thinking of making your workforce more integrated? Through NAB you can create employment opportunities for the visually challenged and have an inclusive work environment.

Rural outreach
In collaboration with the local community, local NGOs and the local Panchayat, we survey villages and identify visually impaired persons. Our whole idea is to give them the support system to earn their livelihood and be independent. Your help will enable us to reach more such places and people. 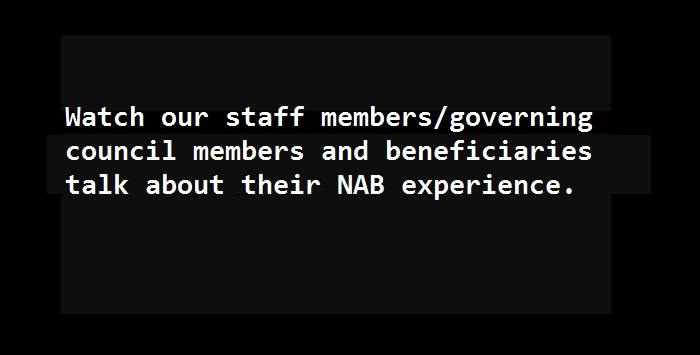 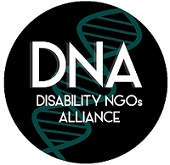 This is what our donors have to say about their experience.


"My father was the founder director of the Mysore training centre and after he passed away I have continued the association. In any kind of association with a social cause, everything depends on how one relates to it and how the other person reciprocates it. In the case of NAB, many of my family members have been involved with it and I have had a long and close association with it. So I have seen it grow over the years. Once in Bangalore I saw a visually challenged person cross the road and when I talked to him, he told me that he had received training at the NAB, Mysore. So it felt good to see that the organization was making a difference to people's lives. I just want the NAB work to be more visible so people are made aware about it"


"I always wanted to do something for others and I think the visually challenged in particular need more support. Over 30 years ago my bank was already associated with the NAB and personally even I wanted to be part of it and that's how I got involved. Over the years I used to get updated on all that was happening at the NAB and I was very happy to see that it was doing a lot of good things."


"I strongly feel that visually disabled persons more than anyone else need the strongest support both, in terms of rehabilitation and general motivation. I have been associated with NAB over the years and have been fortunate to spend time with the students from time to time. I think NAB is a well-established organization that responds well to initiatives or volunteers. I have had the good fortune to have organized a few events for the students to showcase their talent with NAB's help. NAB can reach out more proactively to individuals and organizations both for financial support and employment opportunities by organizing events in organizations and residential colonies to showcase talent, highlight needs and seek support."


"We have been associated with the NAB -Karnataka for over 25 years now and it is part of our focus on the cause of the disabled. When we look at all the programmes that Rotary is involved with, the NAB programmes are the ones for which maximum number of Rotarians are usually present. That itself says a lot."


"Before starting any project we do a study on the requirements and accordingly set targets. As far as NAB Karnataka is concerned, our expectations have certainly been met. They are making good progress with respect to their plans of helping the visually challenged."


"It is very satisfying for us to see the work that NAB is doing."